There is a saying among professional recreation planners that "it all comes back to poop." We obsess over it, and there are reasons for this. Most people don't poop correctly in the woods, and we get to bury the evidence, or have to deal with it at campsites (yes, people will poop right at a campsite. I don't get it either). Despite the prohibition on having structures in wilderness, some managers have capitulated and installed them, because with increasing use, there is just no other way to manage it. But then you have to deal with what to do about the outhouse situation. Do you bury the hole when it's full and move the outhouse? Fly it out? Make a composting toilet, throw some lime in a bucket and tell people to use it, and hope for the best? These are all options being tried with varying degrees of success. There are also places where you have to poop in a blue bag and carry it for miles to your final destination. This is not a particularly fun experience.

So, it really all does come down to poop. When I told J I was going to camp at a certain lake, he frowned. "You're going to that poopy place?" he asked. He's not wrong. This lake has seen overwhelmingly increased use, due to both front desk recommendations plus the fact that it is a relatively easy, 2500 foot, 8 mile stroll. I have seen all sorts of beginner types on this trail. It makes me sad, because I used to be able to go there and only see a few people, but in the past decade it's been discovered. It's good that people are enjoying it, but for the love of Pete, walk a half mile to poop.

Is that enough about poop? I think so. Despite the fear of TP flowers, I wanted to go to the lake. I can't go in summer, not unless I want to be part of a train of people. Fall seemed like it would be OK, and it was a Wednesday. Leaving work at noon, I hurried up the trail, happily encountering only a couple of groups headed out. I asked one of them if it was crowded. "Um, you'll find a spot," he said.

This wasn't a glowing recommendation, but I pressed on regardless. In just under three hours I reached the lake and surveyed the scene. The lake's popularity is well deserved. It is stunning, especially in fall. 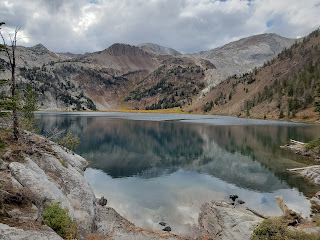 I saw five groups, which seemed like a lot for a weekday, but I was able to find a private spot. Just in time, too, because a vicious storm blew in. I dove in my tent, realizing that I am out of practice for rainy weather camping, but also glad that I had a free-standing tent with the wild gusts of wind that came down from the high peaks. Fortunately the storm was short-lived, and I went for a post-dinner wander.

Soon I discovered an odd cache of gear. In the bushes there was a large, heavy sleeping pad, a water bladder, some clothes, and a big tarp. The items looked like they had been there at least a year. I pondered what to do. I didn't have enough room in my pack to haul this stuff out. In the end, I left it and told the Forest Service. This would remain a mystery.

Night falls really early now, and I retreated to my tent. In the morning I would hastily pack up and hike rapidly to the trailhead to make it to work. Everyone was still in their tents when I left. And believe it or not, I saw no poop. Things might be looking up. 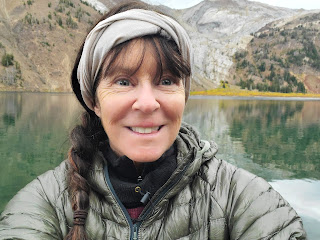