It's OK to have a meltdown in Hells Canyon

I was on my last nerve as we thrashed through a poison ivy forest and approached yet another muddy, wet footed crossing of Temperance Creek. We had been descending for six hours and the Snake River was nowhere in sight. Darkness would be falling soon, and I hadn't brought enough snacks. Whose idea was this, anyway?

Oh right. It was mine. It was October after all, and the high mountains were cold and snowy. Yet, I couldn't quite give up the idea of backpacking. The weather was an uneasy mix, but surely in Hells Canyon it would be warmer. The only friend who would possibly be up for this, Tinkerbell, was dubious but agreed to go. We mapped out a route that neither of us had been on and hoped for the best. You just never know with the canyon.

And here we were, finding out. The first five miles had been chilly and steep, going from 7000 feet to about 3,500. The trail was brushy but visible, and we made good time to the site of the Wisnor Place, an old homestead destroyed by fire a few years ago. Two outfitters, the only people we would see, were cheerfully trying to cut an enormous ponderosa pine from the trail so that hunters could get to their wall tent. 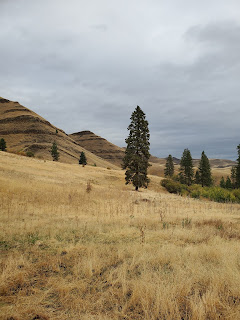 "There's LOTS of poison ivy," they said, "As tall as our horses."

We exchanged frightened glances. After thus bench, camping became non-existent, as the trail narrowed into a steep gorge. It was either stay here and play it safe, or continue into the unknown.

But what is life without adventure, so we pressed on. The trail deteriorated until we were slogging in mud. Poison ivy as tall as my head lined both sides, impossible to avoid. We crossed the creek twenty times, our shoes irretrievably soaked. Finally near dusk, we stumbled onto the beach at the Snake River. 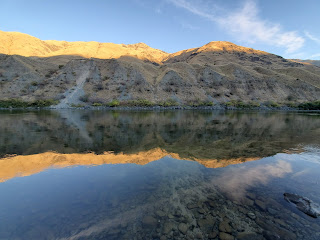 We were at the Temperance Creek Ranch, one of the historic old working ranches, now converted into a set of cabins where hunters could take a jet boat to and stay. The owner, one of the outfitters, greeted us and said we could camp in the trees nearby. Cooking dinner by headlamp, I folded my diseased clothes into a bag and hoped for the best.

When you drop six thousand feet into Hells Canyon, you really shouldn't get up early the next day and hike all of the way out, but a weather system was coming in, so that is what we did. A light rain fell as we navigated the poison ivy forest, this time bashing through without as much care. Tinkerbell had wisely brought waterproof socks, which she changed into at the Wisnor Place, but I had not had the foresight and endured freezing feet as we ascended.

The rain turned to hail, because of course it did, and we dove into the meager protection of stunted trees to find gloves and an extra layer. Wind whipped through the canyon. Snow fell. All we could do was keep climbing. 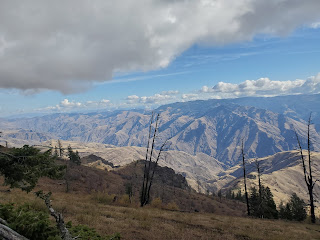 At the trailhead we stripped off our wet clothes and put on dry ones with numb fingers. I blasted the heater as we drove away from the storm. That was really hard, we agreed.

Tinkerbell munched thoughtfully on a Snickers. "It's OK to have a meltdown in Hells Canyon," she said. I thought back to all of my terrifying, frustrating, difficult, magical hikes in this canyon. She was right.