On the beaten path 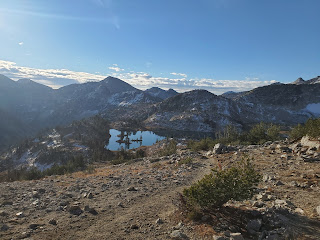 As I approached the trailhead, a woman with a pack on walked down from the permit kiosk and accosted me. No hello, just "are you hiking alone?" Since it was obvious that I was, I said yes.

"Do you want company?" She asked.

I was taken aback. It's one thing to overtake people on the trail and start hiking with them. I've done that before and enjoyed it. But not knowing this woman's destination, her pace, or really anything made me wary.

"I like hiking solo," I said and she gave me a thumbs up. I headed off, but fretted over the next 13 miles. Maybe she was afraid of bears. Maybe I could have made a friend. But then again, instincts.

Oh well. It was October and I was on a mission. Usually I stay off the beaten path, a well-known loop that takes you through some stunning alpine lakes. However, with the first dusting of snow, the tourists had retreated and I hoped for the best. 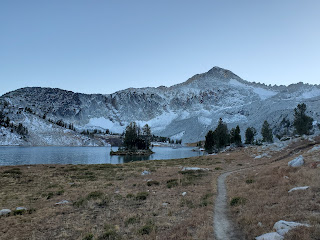 My expectations were met as I hiked steeply through forest and into the alpine basin. Frost lingered in the high meadows and the bushes were red and gold. Best of all, nobody was around. I happily set up my tent at a lake I haven't visited for years. Clad in a puffy and hat, I stared out at a peaceful fall evening. Life was good! 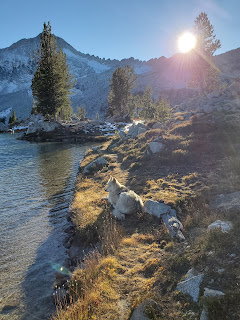 I had the luxury of two nights out, so lingered the next morning to enjoy a protein drink, not leaving camp until the unheard of hour of 8. A few leftover snowbanks covered the trail north of the pass, but I easily made it down to an eerily deserted lakes basin. It was tempting to stay, but it was so early that I decided to press on. Two fishermen appeared, exclaiming that I was a strong hiker after hearing my itinerary. 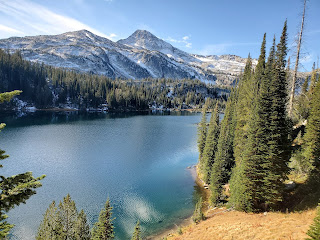 Well, not really, but maybe compared to their five miles a day. I dropped into a meadow by the river to discover where everyone was. Five groups were camped there. While everyone was spread out, I didn't relish that much togetherness. Plus it was only 2 in the afternoon. I quickly calculated: there weren't many campsites between here and the trailhead but I did know of one place. It would make the day a 16 miler, not an undoable feat. 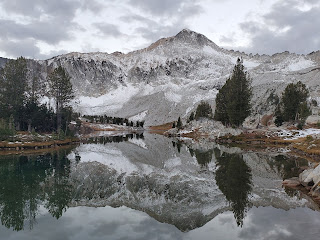 As I expected, nobody was at the junction site, but suddenly a group appeared. They proudly explained their route. The beaten path, plus an extra side trip up to Poopy Lake *my name. "There's a guidebook that recommends this," they explained.

I retreated back to my site, feeling old school and missing the days when people figured loops out on their own. But who am I to judge? They were having a good time. They were so happy that I couldn't bring myself to tell them that their next day's hike, only five miles away, would bring them to a lake that had snow in the campsites. There should still be a few things to discover, even on a beaten path. 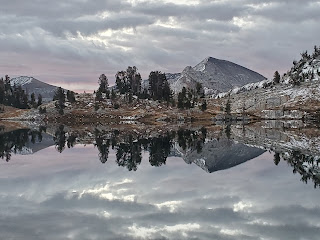