I have all three dogs by myself again, so this has meant less adventure and more sticking to areas without people. It's hunting season too, which adds another challenge, and dogs sporting flagging and harnesses.

What makes it better is that we are having a spectacular larch season. The larches, the only deciduous conifer, are always amazing here, since they show up golden in a dark forest, but for some reason this fall they stand out more than ever.

The dogs and I have some normal routes, which include little-known ski trails and an old logging road. First we drive anxiously to the parking area, checking to make sure no hunters are there. If there are, we move to Plan B. Fortunately, people are fairly predictable and we have been able to hike through sunlit groves of larches quite often.

Route one is a walk into the closed ski area. I can then connect a series of ski trails if I want to run, or hike longer. In fall, it is a quiet place with nobody around. We meander through tall grass and walk up toward the canal, logging a few miles. Soon there will be snow and we will be skiing here. 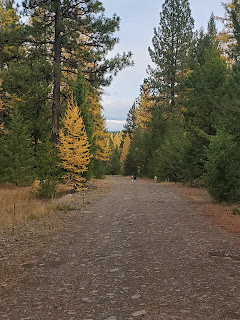 Route two is up a road closed to most motor vehicles. I hike this a lot in the winter, slogging with snowshoes. In fall it's easier, but no less strenuous. However, the view looking into the fogged in valley is gratifying. I hardly ever make it to the top with the dogs--it's a lot of effort to train them. But even though I don't get to 8000 feet, it's still worth it. 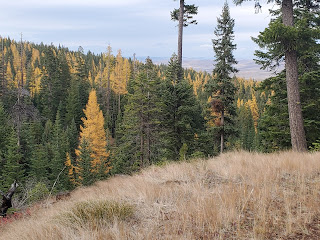 Route 3 is up a trail where few people go, because it doesn't have much for views until you reach the five mile mark. But at the trailhead, the views are outstanding. After staring at the larches, I head up the trail, sometimes going as far as the wilderness boundary. If I hang in there long enough, the trail opens up into an alpine basin. 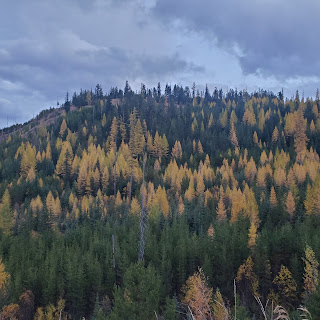 The thing I like best about larches is that even when it's a gloomy day, their bright color makes it look like little spots of sunshine. Unlike previous years, we haven't had our typical winds, so the larches are hanging on longer. I can't get enough of them.