How to sleep for twelve hours

There's something magical about the Snake River in its wild stage. I've been to the confluence with the Imnaha River many times, but I can't quit it, despite the truly terrifying one-lane, switchbacked road to get there. There are a lot of things that can go wrong on that drive, but the end result is worth it.

I haven't slept much lately, subsisting on about four hours a night, which wouldn't be a problem if I didn't have to present myself, bright and sparkly, on video conferences starting at 7 am (darn you, East Coasters). I dream of naps, but there's just no time. What to do? Backpack in early winter, when you are forced into your tent at five in the evening.

I set out optimistically on the drive, and was rewarded by only having to back up once for a truck and trailer. I've written about this hike before; suffice to say that it's pretty easy, following the descending Imnaha River to the confluence. Once there, I was both elated to see no people and disturbed to see cows. I've never seen them there before and cows tend to like the same campsites as people. Fortunately, I knew of a secret spot where, for whatever reason, cows don't go, so I headed there.

There was only soft sand, willows and no cows. Heaven. Why didn't I do this more often, I pondered. But then would it be so special? I think not.

One of the great advantages of descending to under 2000 feet is that it can be warm even in late November. I had packed a plethora of cold weather gear but didn't need it. I sat in the sand and watched a few jet boats race back toward Lewiston, and then all was quiet. 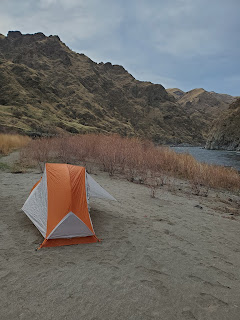 I crawled into the tent figuring I would read for a few hours and get back up, but to my surprise I fell asleep and mostly stayed asleep until six the next morning. I guess it's true--a big river cures insomnia. 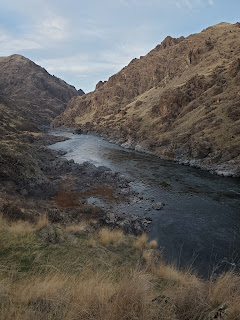 The next morning I had to beat feet as it had begun to rain, and the access road is nearly impassible once it gets soaked. People claim they need chains to navigate the slippery mud. As much as I love the area, I didn't really want to live there with only a couple of bars for sustenance, so I raced quickly to begin the daunting drive out.

My writer friend said, "the faithful old Snake, it just keeps rolling along and healing us." She's right. 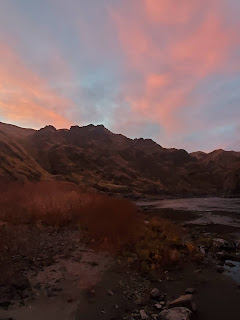