I don't know why this is, but people in my town seem to think I've been everywhere. People I rarely cross paths with will ask what the skiing is like at an obscure location, or how much snow there is on a trail, or if the bugs are bad at a random lake in summer.

If I know, I'm usually happy to say, but there's a fine line between being helpful and becoming a guidebook. I think the requests are more numerous now because we are all so used to googling anything we want to know. Remember card catalogs? No?

Sometimes, though, a question will pique my interest and I'll decide to go scout. Such was the case with Kinney Lake. Long time readers may recall that this is my early summer swimming lake and, due to lack of snow last year, the most perfect skating rink. When a friend mused about conditions there, I decided it was the perfect excuse for an expedition.

I recruited a friend and we geared up with snowshoes. This road drifted shut during our 70 mile an hour windstorm and won't be plowed again. We crunched along in crusty snow, quickly ascending the mile to the lake. 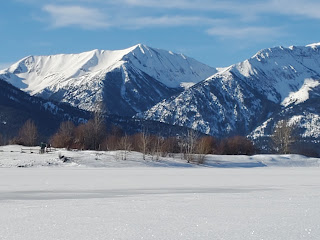 A lone ice fisherman with two huskies had pulled in an ice fishing shack, but other than that, we were alone. Venturing out onto the ice always feels a little strange at first, but it was solid and we walked a couple of laps around the lake. After days of clouds, the sun was welcoming and warm, although the temperatures were in the teens. If anyone wanted to skate, they would have to arrive armed with a shovel and a posse.

After an hour we headed back to the car. The friend who had asked about conditions coincidently drove by at that moment. What was it like, he wanted to know, could he skate? I relayed the outcome of my scouting trip and he drove by, perhaps plotting a siege with shovels.

Later, I went to scout the small pond at the end of my street for skating possibilities, and the big lake to see if it is frozen (yes, and no). 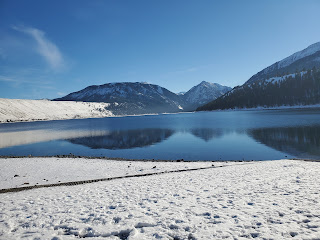 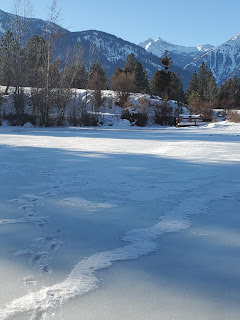 I'm not sure how I got the reputation as a scout, but I doubt I will be able to shake it. Like anywhere, in a small town you get assigned roles from the beginning. I don't mind it that much, really. I like being the first one to arrive at a destination as snow is melting. I like the discovery, so much better than hearing it from someone else.