I hauled myself up the backside of Mount Howard, carrying snowshoes. It's always better to bring snowshoes and not need them rather than leave them behind and need them, I reasoned. Some vintage sno-cats had powered up the road the day before, packing it down, but not in a a good way. Their tires created ridges, and the snow was soft, so it was like walking in mashed potatoes.
Still, I was determined. I've written about this hike before, and it has become a semi-annual staple. On one hand my goal is to get as high as possible--8,400 feet--and on the other, this hike serves as a good fitness gauge. It's hard--almost 4,000 feet gained in 4 miles--and because I couldn't park at the trailhead, it added another three miles to the total.
As usual, nobody was around. I've only known of a couple of people who do this hike, probably because it isn't that scenic until you get to the very top. And in summer, why not just ride the gondola that brings thousands of tourists to the summit? It's also hard, as I have mentioned before. But as I've said, it serves as a good fitness gauge. Today, I wasn't feeling so fit. I slogged slowly upwards, half tempted to turn around. I've been uncomfortably aware that my endurance could be better. I don't have a lot of time during the week to exercise, and the weekend warrior thing wasn't cutting it. 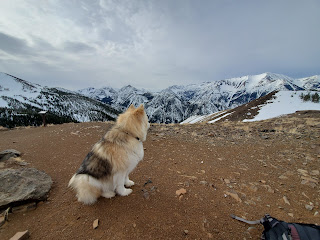 I've never been a sprinter; I like the long haul. I endure the elliptical machine and the bike trainer, but can't endure the boredom of more than an hour on them. I like the endurance of hiking or skiing for hours, at a pace that is sustainable. Someday I hope to have enough time to live this way.
At the top of Mount Howard, a bitter wind kept me from staying long. I looked over all of the peaks and the places I've been and the ones I have yet to know. I hastily chomped down an apple and part of a fig bar. As always I wished I had brought a tent instead of descending into the fog that kept the valley hostage.
At a bonfire a few days before, friends talked about what comforts of civilization they would miss. Hot showers were high on the list, followed by toilets and good food. I can be on board with those things, but I love being outside more.
The hike down was fast, aided by two snowmobilers who came up, packing the snow down a bit more. All too soon, I reached my car, having put in a solid effort.
I considered the fitness gauge. Not great, not terrible. I don't obsess over these things, or count my yearly mileage, or other things that I could do, but am too unconcerned about to tally. Still, I emailed my hiking partner, Flash. How about a few weeks on trail? I wanted to know.
Posted by Mary at 7:36 PM