The secret world of the Wednesday adventurers

For weeks it seems, we have been encased in freezing fog. Running in the fog, walking in the fog, driving timidly to the gym in the fog, working with fog outside. Fog fog fog. It can grate on the nerves. (How I survived seven years in a rainforest is beyond me.) It was made all the more infuriating because I knew that just a few feet in elevation, the sun was shining.

My birthday randomly fell on a Wednesday. Even though I don't really celebrate, I refused to sit in meetings on that day. We inexplicably got a boon of eight hours of "pre-holiday" off for Christmas and New Years and we could use them anytime before the end of January. Not being stupid, I decided to use them for my birthday.

We drove up the mountain to discover perfection. The snowmobile club had groomed the entire Hass Owl loop, which rarely happens. Also, the sun was shining and it felt like summer (if 40 degrees is your summer). As far as days went, this one ranked right up there. 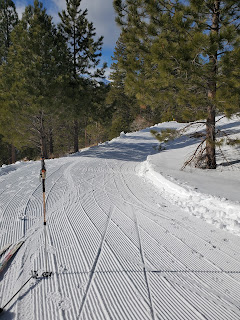 I skied happily along the corduroy, making record time on the loop. Usually, it takes about four hours to complete. Today, it would take two and a half. And because most people go clockwise, while I was going counter, I ended up meeting people. All of them, I knew. All of them aren't working, are retired, or are self-employed. It dawned on me that there's a secret society of Wednesday adventurers, a whole unknown world of people who are out there while the rest of us are hating the fog and our computers.

Of course, I knew this already; the same friends have given up asking me if I can join them on Wednesdays, because I usually can't. But it felt like I was getting away with something as we met each other on the trail and stopped to chat. For once, I wasn't envious of them, because I was one of them. 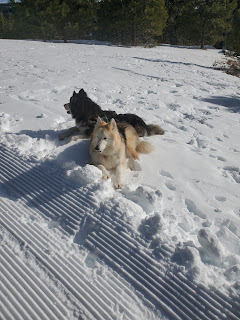 A group of friends burst into "Happy Birthday." Nobody was in a hurry. They had all day. In fact, they had all week, all month. Someday I will be one of them, but I had to eventually descend back to the fog. On the weekend, I saw some of the same friends, along with other weekend warriors like myself. We were all down to one layer in the sun, so used to the bone-chilling fog that it felt warm.

I can't take too many Wednesdays off right now. I returned to work to a grim meeting. "Everyone on this call looks really stressed," I typed in a chat with my co-worker. "That's what it's like to work here," she responded. "Hair on fire!!" I wrote back. There was such a difference in the faces of the people on the screen and the ones I saw on Wednesday. I hope to carry a bit of the secret Wednesday adventure spirit with me in spite of it all.