I inched my way on a snowy, icy trail around Apache Peak. The trail was barely wide enough for my feet, a ledge that wound around the side of a steep cliff. A young hiker had died here, a couple years before, plunging down the face of the mountain. Ahead of me, Flash and K Zed navigated the exposure without as much fear.

Contributing to the risk was the fact that Flash and I had gotten up at 3 am my time to catch a plane, hastily pack our stuff in the airport and get driven by a trail angel to the Fobes Saddle trail, which would intersect the PCT in a climb of three miles. Through a sleepless haze, I registered the fact that I had successfully navigated the icy section and we were back on dirt, albeit buffeted by a stiff wind.

The last time I had been here, the rangers had warned against us tackling this section and there had also been a fire closure, which meant that we had to take an unpleasant alternate to rejoin the PCT. Even though a few people were attempting Fuller Ridge, they had appeared off the mountain claiming the snow travel had been hazardous. Ever since, though, I had felt like I had missed out on an important part of the PCT, and when Flash wanted to complete a 130 mile section, I agreed to go along.

However, I was doubting that decision as we walked the ridge. Though we had left the snow behind for the day, campsites were scarce. The trail bore the full brunt of the wind, and we needed shelter behind trees. Optimistically, we headed for a campsite listed on our Far Out app just as the sun begin to give up for the day. 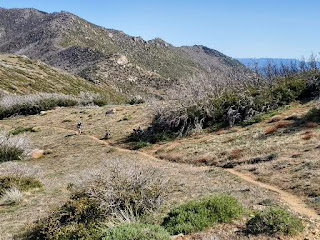 Our hearts sank as we saw a veritable tent city in the campsites. Everyone and their brothers had wound up in this place, and the next site was a couple miles away. This would have to do. I wedged carefully in a small desperation site next to Blues Clues and Sunfish, two twenty-somethings, and Flash ended up bashing through the brush to find an equally desperate site. Even as we were setting up, other campsite seekers came in to try to find spots. Shivering as I boiled hot water, I contemplated my life choices. Wasn't Southern California supposed to be warm?

The PCT seemed more crowded than ever, but as we set off the next day for more ridge traversing, we mostly hiked alone. It was only when we would stop at a water source that other hikers would pop up out of nowhere. Teeth chattering, we ducked out of the wind to have a second breakfast and an intrepid hiker trudged by in shorts. Later at a snowy water source, we told him he was a badass for wearing shorts--I had started out the day in every stitch of clothing I had brought. "That's Mr. Badass," he said, and we had bestowed a trail name.

Many hikers divert to climb Mount San Jacinto, but the trail had turned to icy snow again and, not having microspikes, we chose to stick to the official PCT. Our camp that night overlooked a panorama of distant mountains and the glittering lights of Palm Springs. Swathed in our puffy coats, we speculated on the Coachella Valley temperatures. Here at over 8,000 feet, it was still winter. 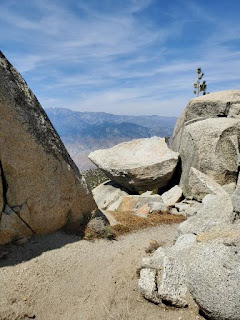 I had looked toward Fuller Ridge with enthusiasm and fear. Tales are told of hikers wandering all over the mountain, lost. People have disappeared here. Yet, it is a beautiful three mile traverse along the side of a mountain, and much of it was snow free. "This is great," I enthused as we passed huge boulders and pine trees. I had spoken too soon--we then faced a two mile stretch of icy snow that soon turned into a slippery nightmare. The exposure wasn't life-threatening, but staying upright was. While Flash was able to navigate it, I ended up falling three times, my shoes sliding in the soft snow. "I'm over this!" I exclaimed, skirting the edges of a meltdown. Slowly we made our way out of the snow zone, and sat at a closed campground, boiling water for a 20 mile waterless stretch. I had closed the gap from my previous section hike. 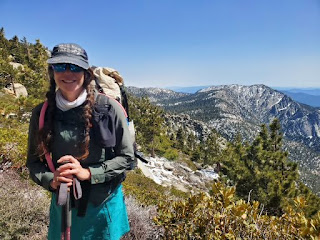 We cursed the trail builders as we crisscrossed the mountain in mile-long switchbacks, pointing out where they could have easily lost elevation instead of staying high. I began to bonk, surviving only by popping Starburst and singing. Arriving at one of the few flat areas to camp in, we found Blues Clues and Sunfish occupying the best real estate. It was a desperation camp once again. But with a nice sunset. 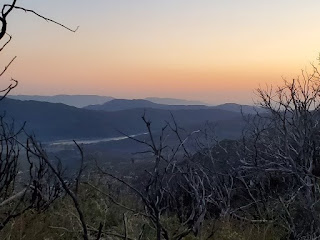 The following day, I knew, we would descend to the valley floor and begin what I had considered the worst section of the whole PCT: the four mile slog to the I-10 underpass. When we had done it years before, temperatures were over ninety degrees. A forty-mile-an-hour wind had scoured our faces. I dreaded it, but it seemed much cooler than that year. How bad could it actually be? 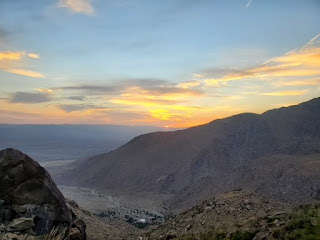